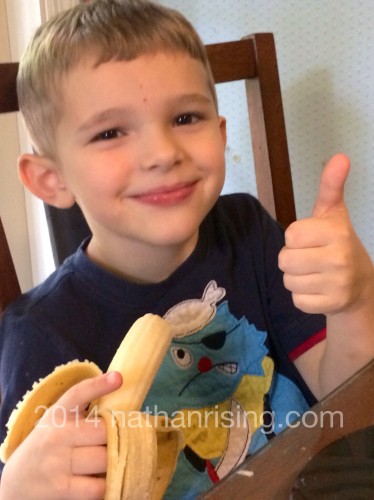 As I’m sure you’ve noticed, I haven’t written over the summer, but now that Nathan’s back in school and things are winding down, I figured I’d give an update on what all has been happening the last number of weeks.

Nathan has graduated preschool with flying colors. And oh! He taught himself how to read overnight. Literally. He went camping with Paul’s family, and when he left, he didn’t know how to read. When he came back, he had a surprise for us; he read the entire book “Are You My Mother” from beginning to end! He got stuck on a couple of words but otherwise glided right through it. I couldn’t believe it! I am one proud mama. So now summer is over and my baby is officially a kindergartener! I’ll be honest- I was afraid summer break was going to be really rough considering how difficult transitions are for him. But it was really great. Don’t get me wrong, he definitely had his “off” days,  but it was such a joy to have both of my sons home with me.

I’ve also started a chore chart with Nathan. It’s an app on my phone called Chore Monster. Basically, I come up with a few chores and assign them a certain number of points. Once he accumulates points, he can pick out rewards such as ice cream, X-Box time, something out of the prize box, etc. He loves it, and it’s teaching him concepts such as saving up his points for the bigger rewards.

And he also lost his other bottom tooth! And both of his top teeth!

John is growing up so fast. He’s finally, FINALLY now eating table foods. We had the hardest time getting him to eat any of it because he would gag and puke any time we put anything with texture in his mouth. He’s finally gobbling up Cheerio’s, Saltines, all kinds if fruits including bananas, grapes, strawberries, and cantaloupe and now eats the same things we eat for dinner. Spaghetti is his favorite meal EVER. I’m glad the pureed baby food days are behind us. That stuff was expensive, and he ate about 13-15 jars of it a day. (Yes, he totally eats like a man.) AND, he’s just super cute sitting in his high chair, eating the same things we eat. Especially spaghetti. Oh yes, watching him eat spaghetti is priceless.

He’s great at games where you put shapes in the right sized slots, and he loves books and to be read to. He’s still not saying any words other than Mom and uh oh, which he says about everything, but he is finally pointing at things. He was waving, but he’s stopped. He was also saying other words such as dada, ball, bye bye, and hi, but he’s stopped that as well. I don’t know if it’s considered regression or if he’s just stubborn. We’re really hoping this isn’t a marker for autism. Since Nathan is on the spectrum, John is considered “high risk” and has a 1 in 4 chance of being on the spectrum himself. I’ve brought up my concerns to the pediatrician, and he said it’s hard to tell since he’s so young and that the issues I’ve brought up wouldn’t normally concern him, but since John’s big brother is Autistic, that is what makes these behaviors concerning. And the higher functioning on the spectrum he could be, the harder it is to diagnose when they’re younger. I’m not particularly worried about it, though. It is what it is. And if John ends up being anything like his big brother, then we’re going to have two brilliant boys on our hands. Plus, if that’s the case, we’ll already know how to deal with it since we already have one child on the spectrum.

John has also started walking, and it’s the second cutest thing ever! (The first being watching him eat spaghetti.) He high-steps with every step and is very proud of himself. I love the sound of his little feet slapping on the hardwood as he toddles all over the place. Oh how I love this stage.

In other news, Nathan made himself a new friend! A very dear friend of mine, M, who has been my close friend for about 15 years, has an 8 year old son, E,  with high-functioning Autism and a 6 year old son, A, who is neurotypical (that’s the “politically correct” way of saying non-Autistic. Well E had a birthday party a while back, and we were invited. It went wonderfully! See, whenever I try to have playdates with Nathan, kids without Autism just don’t get him. They don’t understand him and are not on the same page as him. Nathan ends up getting upset and worked up and meltdowns typically ensue. But sweet E was different. They got each other immediately. It was so heart warming to see. And since A’s older brother is on the spectrum, even though A is not, he totally understood Nathan as well. There was lots of spinning in circles, happy hand flapping, and in depth conversations about Star Wars, and everyone had a grand time. They spent most of their time in E’s room, lost in their own little worlds as they played Lego’s together. And then when it was time to leave, I warned my friend M that there might be a meltdown… she and her husband laughed and said that in fact, there might be two meltdowns and E is prone to them as well. When it was time to go, Nathan was on the verge of losing control but I was able to talk him down by assuring him he would see E again soon.

As for kindergarten, Nathan is rocking it!! Academically, he already knows everything they’re teaching. They’re teaching how to count to 20- he can count to 100 forwards and backwards. They’re learning the ABC’s- he knows them all and can already read. He already knows all the shapes and colors and numbers. He already knows simple math. So the downside of this is he gets bored. He ends up finishing his work and walking around the class doing the other kids’ work too. His teacher is awesome, seriously. She gets him and can really can relate with him. So she tells him what a good friend he is but that the other kids can’t learn how to do it if he does it for them!

I used to do the same thing in school. I clearly remember how utterly boring it was, so I refused to do my work. I’d put big X’s on the paper and write “this is stupid” and then I’d go so the work for the other kids. Unfortunately for me, I had a teacher that didn’t want to deal with me so she tried to put me in the intellectually disabled class. I’m so thankful Nathan doesn’t have a teacher like that. She’s told me he mostly plays alone in he playground, but he seems happy. That’s just part of autism… As long as he’s happy, I’m happy.

Nathan has also started wearing glasses! He’s so stinking cute in them! But oh man, is it a hassel to get him to keep them on. He’s already bent them all up, accidentally stepped on them and sat on them, and the lenses have popped out. A couple days ago on the playground at school, one of the lenses popped out. Nathan and his teacher looked for it, and then Paul and Nathan went back to school to look some more after Nathan got home,  but no luck. We had to order a new lense. I’m going to have to get one of those bands that goes around the back of the glasses to hopefully help keep them on. Of course, Nathan will still be able to take them off if he wants to, but hopefully the band will make it to where he can’t remove them absentmindedly. So all in all, things are going great here. I miss Nathan when he’s at school, but he absolutely loves going is is a sponge for learning. My kids make me so proud.