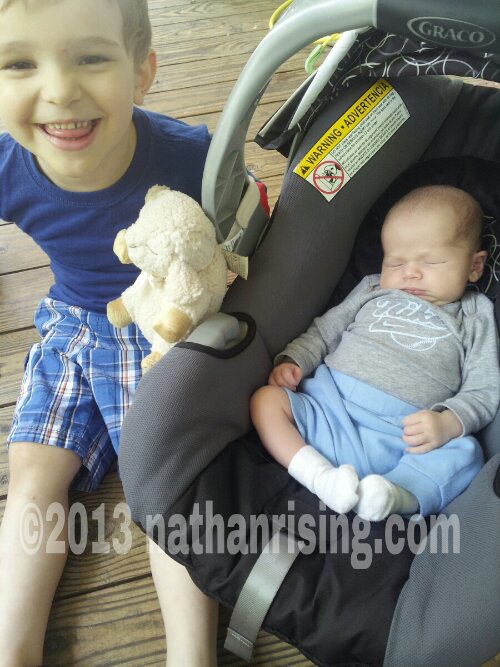 We’ve finally been getting back into the routine we used to have during the week. I’ve started going back to the gym (which is awesome. I’m so glad I worked out throughout my pregnancy because getting back into it is a cinch!) and now we’ve also resumed bible study. After starting back at the gym last week, we’ve already seen a change in Nathan’s behavior. Bringing home a new baby and then moving to a new house is a lot to ask of a four-year-old, so its no surprise he was getting an attitude with us.

He really missed going to the gym. So much so that the first two days back, trying to get him to leave when it was time to go home was like pulling teeth! He would scream, shout, tell me no, run away from me… I told him that we WILL be coming back and he doesn’t have to be afraid that we won’t. Poor fellow loves being there. After that, I had a long talk with him about how that kind of behavior is unacceptable. I explained to him that in order for me to keep bringing him back, I have to trust that he will behave himself and leave with me when it’s time to go. Apparently, my talk worked! So far so good, because now when I go pick him up, he shouts, “MOMMY! HI, MOMMY!” and he will come racing over to me and envelop me in one of his amazing bear hugs.

This week, our church has been doing Vacation Bible Study. Up until this point, he hasn’t been because of his sensory processing issues. When he’s somewhere that’s too loud, too bright, too busy, too many people, etc., his brain goes into sensory overload and he ends up having a meltdown. By meltdown, I don’t mean a temper tantrum. Those are two totally different things. A tantrum is used to manipulate an adult to get his way; a meltdown, however, is a complete and total loss of control. So at any rate, his meltdowns have gotten a lot better as he’s gotten older, so we went ahead and let him to go VBS.

One of my sweet friends is head of the Christian Education Department at our church, and she knows about Nathan’s needs. She put Nathan in a group with an adult who works VERY well with him because she just so happens to be quite familiar with children and sensory issues. He’s still hard for her to control, but she is so patient with him and can actually foresee a problem before they happen. For example, she anticipates he’ll go into sensory overload when he’s around other loud, boisterous children, so she’ll make sure to sit between him and the other child. I can tell when I go pick him up that he’s definitely overloaded, however. He starts screaming and running around the church, plowing into anyone and everything in his path. So for the last two remaining nights (tonight and tomorrow night) I’ll be picking him up 30 minutes early to hopefully help with that.

My sweet Nathan. We’ll get this under control sooner or later. It will definitely make his life so much easier once he can figure out how to control it.