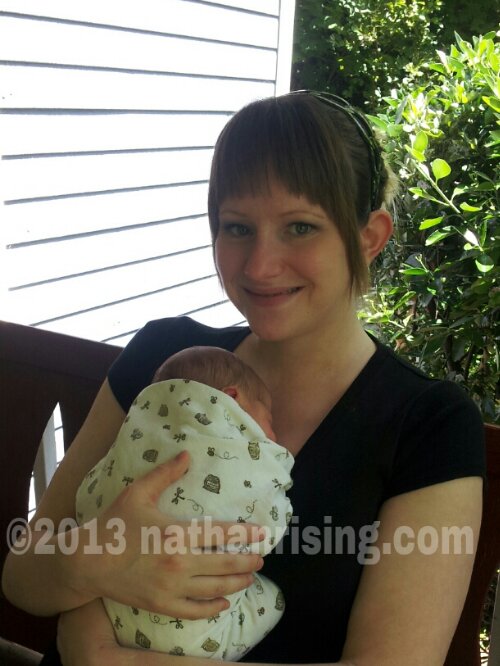 I can’t believe my baby boy is already over one week old. It’s been a rather hectic week to say the least; neither Paul nor I got any rest! The transition back to mothering an infant as well as recovering from childbirth definitely has its challenges.

Nathan’s had a wonderful time this past week. Paul’s parents, grandparents, and other family all went camping this last week, and they took Nathan with them. It was great because he got a special treat being away from home, and we had some alone time to adjust to the new baby. Nathan was gone for four days and three nights- the longest he’s ever been away from us! He’s had a total blast though, but I still couldn’t wait to see him. When he got home, he ran inside and gave me the biggest bear hug and immediately started telling me all about his camping trip; how he and grandma played games, how he got cuts and scratches from playing, how he fell in the parking lot at a gas station and scraped his knee… it was good hearing him talk about his adventure! I missed him so very much.

Unfortunately, Paul and I didn’t really get to enjoy our time much because on Tuesday evening, Paul threw his back out. As in, he was completely out of commission and unable to walk or even stand. It was heart-wrenching for me to see because he’s all big and strong and stuff. He’s not allowed to get hurt.

Because of that, we had no choice but for me to be the one to run errands and drive the baby and myself to appointments. On Wednesday, I met with a Lactation Consultant at the birth center because baby John & I were experiencing some breastfeeding issues. IT HURT. I don’t mean the normal pain that comes with beginning to nurse a new infant. I mean it was a horrible, blinding-white pain that made my toes curl (literally.) I came close to vomiting a few times from the pain. Come to find out, John had an obvious tongue tie and lip tie as well. So we made an appointment for Thursday to get that fixed. Next we went to his first pediatrician appointment- a new one closer to us. John had already started gaining his weight back (babies lose weight for the first two weeks or so after birth). And I really like his new pediatrician! After that, I had to go to the store to pick up some neccessities and ended up really regretting that decision. By the time I walked out, I was in excruciating pain and fighting back tears. Now I know why the midwife and nurses told me to stay off my feet for two weeks.

Thursday, I took John to get his tongue tie & lip tie fixed. It’s a very simple procedure and fortunately doesn’t cause a lot of pain. the doctor just clips the frenulum (under the tongue) and the same thing with the upper lip. He couldn’t fan his lip out to nurse properly because the skin connecting his lip to his gum was too short. And he couldn’t get a proper latch when I fed him because the tongue tie prevented his tongue from moving properly, which resulted in crazy pain for me.

It’s now been three days since his procedure and the difference is like night and day! His latch is great and nursing is no longer agony! I am so very thankful that it was caught. I suspect Nathan had the same condition since tongue-tie can cause all the same issues John was experiencing. If left untreated, the baby can have weight-gain issues- which was a struggle with Nathan. Thank goodness it was caught in time!

Also, Paul was finally able to stand up and walk some on Thursday. Earlier that morning, he had tried to stand up and when he did, something popped in his back- and he could walk! Thank goodness! It was a slow, shuffling walk but way better than being unable to walk!

So now that all those errands and appointments have been taken care of, I’m finally trying to relax. Easier said than done. There is so much left to do… there are about four loads of clean laundry piled on my kitchen table. I can wash them & dry them just fine, but finding the time to fold & put them away is another story! Not to mention doing basic house cleaning stuff. Vacuuming, dusting, mopping. Sigh. I’m going to have to just let it go for now so I can rest. Paul’s feeling much better today. His back’s still burning and stiff, but he can get around better as long as he’s careful about bending over and such.

So now I need to just kinda sit down and enjoy my new baby. They’re only this little once! I want to enjoy this time with him… and speed my healing process!