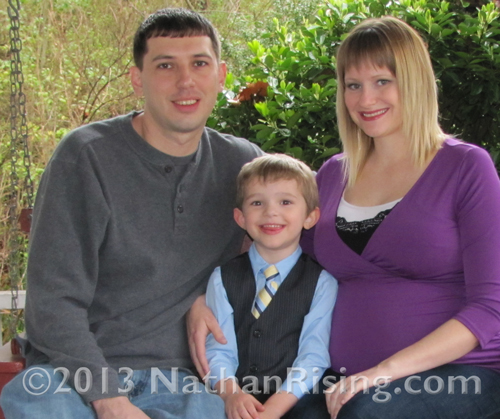 It’s getting closer! I am officially full-term (37 weeks) which means that the baby is developed and should I go into labor at this point, it would be safe to deliver him. Since the majority of babies arrive within + or – two weeks of their estimated due dates, he could pretty much arrive anywhere from now to 5 weeks from now. I suspect he’ll be here sooner rather than later because my body is definitely gearing up and preparing with practice contractions. They’re quite painful and can be pretty intense. So I’ve been almost in panic-mode… there’s so much left to do! Get the house organized & cleaned, (which seems to be next to impossible… as soon as I clean it, it’s messy again), get all the baby gear from Nathan’s infant years out & cleaned, sort through Nathan’s baby clothes & get them washed & put away (almost done!), and lots of other stuff. I’m trying not to let it all overwhelm me and instead keep thinking about how exciting it will be to finally meet this baby. The contractions are keeping me up at night, but they’re not regular enough to be considered active labor.

We still don’t have any names picked out yet. It looks like it’ll be one of those things where we wait til the baby’s born and then after we see him, we’ll decide. I don’t particularly like that idea all too much because not knowing gives me even more anxiety than I already have! I like to have everything in order and ready. Sigh.

I’m really looking forward to going to a birthing center this time around as opposed to a hospital. Speaking from my own experience, a birthing center is way safer… there is only a 2% chance of something happening &  me ending up with a medically needed c-section, for example. Hospitals, however, have a much higher rate… a 33.3% (and upwards) rate of c-sections- many of them not even medically necessary. That’s one out of every three women having a major abdominal surgery with very real risks such as life-threatening infections and problems with the placenta in future pregnancies. Thank God VBAC (vaginal birth after cesaerean) is an option for many women, as opposed to repeat c-sections. I really believe the high rate of c-sections is attributed to the cascade of interventions laboring women are subjected to. Pitocin and inducing labor, doctors putting labor on a timer (hence, instead of it being “failure to progress,” it’s actually “failure to wait” on the doctor’s part, constant monitoring of temperature, blood pressure, etc that force women to lay down rather than moving around, epidurals, I.V.’s, birthing in The Worst Possible Position- laying on one’s back… birth has been turned into a medical procedure that requires medical management. I’m sure many women are fine with that, and that’s cool. But not me. Nope.

At a birth center, I am free to eat and drink to keep my energy up. I can move around, which helps the baby get into the correct position. I can wear whatever clothes I want instead of a horrible hospital gown. There is no timer for my labor; baby will arrive when he’s ready as opposed to arriving on someone else’s schedule. I can labor and birth in water if I so desire. My baby’s umbilical cord will not be immediately clamped and cut, thereby allowing more blood and oxygen to tranfer to him from the placenta (where his blood is stored). I will start breastfeeding the moment the is out of my body; he will be placed directly on my chest immediately after delivery. He won’t be taken away from me for someone else’s convenience and his measurements etc. will be taken while he is on my chest after we have breastfed and bonded.

A birth center birth is everything I wanted but didn’t get with Nathan’s birth. His birth was scary, traumatic, and it took me a long, long time to come to terms with it. The whole ordeal & details of what I endured are not something I talk about, much less publicly, but it was more than just not getting the birth I wanted. I had complications that lasted months and months. Additionally, I feel like I was deceived; when I went on a tour of the labor & delivery floor of the hospital, I was told that they treat birth as a normal, natural event. Well, that’s the opposite if what I experienced there. It was 100% medically managed. I was subjected to interventions I didn’t want but was told it was “standard procedure.” One intervention led to another, led to another, led to another, etc. And before I knew it, it had gone incredibly awry.

So having this one at a birth center, MY way, is me taking my power back. It’s my body, my birth, and I am the one who says what will happen to me. No forced procedures and lack of informed consent. I’m super happy with the midwives there and how supportive they are. We’re in this together as a team, and they want to help empower me after such a nightmare of a birth the last time. And oddly enough, even though I’m nervous about the pain, I am incredibly excited to have this chance to experience birth the way I’ve always wanted it to be!

So today I am bustling around, getting my bags packed (just in case) and tying up a few loose ends. I’m not sure how much longer baby boy will give me before he makes his grand entrance. I am so excited to meet him!