« Picture This
The Strange Case of Dr. Jekyll and Mr. Nathan » Our 30 pound Maine Coon kitty is a big ball of… well… fur.

My husband got Turbo a few years ago from a rescue center for Maine Coons. Turbo had been abused, so it took years to get the poor guy accustomed to a happy, domestic life. He’s all in all a pretty good cat. His biggest downfall, however, must be that he doesn’t groom himself.

Perhaps it’s because of his girth.

Or, perhaps, he’s just lazy and doesn’t give a damn.

I lean toward the latter. He’s very independent and aloof, and he has his own idea on what he should do. He’s comparable to having a teenager. We have to brush him every day or his fur becomes matted and tangled. When that happens, Paul has to cut the out the mats. Turbo does extraordinarily well when that happens and just lays there, sometimes meowing somberly in protest, eyes wide and ears back, but never biting or scratching.

He lets us know he doesn’t like it, but the big guy tolerates them. We tell him if he doesn’t want us to groom him, he needs to groom himself… but he never listens. Maybe he secretly likes when we do the grooming, who knows?

He also likes to play in water, which is a habit we have worked hard to finally break. I got tired of constantly cleaning paw prints off the floor.

You can normally find Turbo on the back of the couch, lounging lazily under the weak heat of the table lamp, sometimes twitching with relaxation as he dozes. When it’s time to eat, he usually waits until the other cats have had their fill before sauntering casually to the food bowl, plopping down, and enjoying his meal in peace without the other cats nudging their way in.

Turbo is one of the smartest cats I have ever known and pretty cool to be around, even for a cat.

Even when he insists on being King of the House by SITTING ON THE OTHER CATS when they steal his seats. 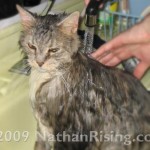 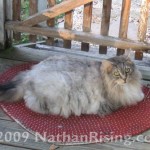 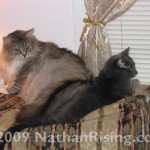 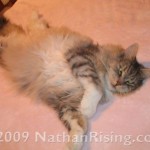 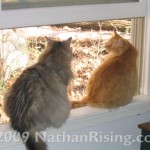 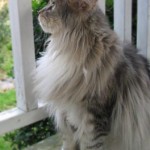 This entry was posted by Jen on September 1, 2009 at 3:18 pm, and is filed under Pets. Follow any responses to this post through RSS 2.0.You can skip to the end and leave a response. Pinging is currently not allowed.