The most neurotic of all our cats has to be Meeper.

It must be something about rescue kitties; all of our cats are rescue cats and all of them have their own particular neurosis. If Meeper was human, he would need Valium and a prescription for potent anti-psychotics… which would never be potent enough so he would eventually end up being committed to a MENTAL HOSPITAL, doped up on Thorazine and Ambien.

I don’t mean he’s a crazy crazy. He would never hurt anyone. He would never bite or scratch, not even if his life depended on it. Meeper is a sweet, affectionate cat who loves attention… until you cough, sneeze, or just BREATHE TOO LOUD. Then he scampers off to the nearest dark corner, pulse racing, staring at you with large, glowing, untrusting eyes.

His bad habit of lurking in the shadows earned him the nickname Creepy Meepy. He’s so afraid of everything that he creeps around, skittering quietly from one dark recess to another, scared to death of seeing his own shadow. The poor thing even meows oddly… it’s this weird, halting sound that sounds identical to Predator… just like in the movie Predator.  Other times, his meow is a barely audible meep.

Sometimes when I’m playing with Meeper, he’ll randomly become frightened from the sound of my stomach digesting my food or my TOENAILS GROWING and will take off running, tail tucked, ears flat, eyes wide and bulging… only when this cat gets scared, he runs at you rather than away from you. There have been many times he’s become tangled between my legs, nearly causing my demise.

If he were human, I am certain he would also be diagnosed with Obsessive Compulsive Disorder. Once, after he used the litter box, I counted him scratching at the sides 37 times.

Only in my world does a cat scratch at the walls of the litter box 37 times after using it.

I love that cat, though. He wouldn’t be Meeper with out all his neurosis… and that’s what makes him the perfect addition to our family of fur babies. 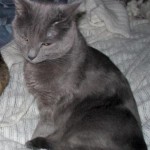 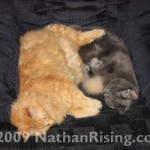 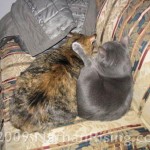 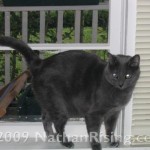 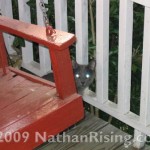 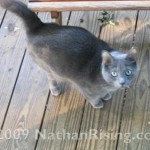 This entry was posted by Jen on September 8, 2009 at 5:01 pm, and is filed under Pets. Follow any responses to this post through RSS 2.0.You can skip to the end and leave a response. Pinging is currently not allowed.