« Exersaucer!
A Day in the Life of Nathan » Nicknames: Landru (after a machine character on Star Trek), Banana

I have never known another cat like him. I swear he thinks he’s a human. He sits like human, meows and carries on conversations as if he was human. He even GRUNTS. Like a fat, content human.

He is a kind soul who loves to be the center of attention and loves to be petted. I bought Andrew, along with his litter mate Kayli, from an adoption center when he was 3 months old. He is a flabby tabby who walks with a pronounced waddle with fur as soft as velvet. He has a tail like a feather duster, eyes with human emotions pouring out from them, and a large-capacity voice box.

When he’s “talking” to me, his voice changes pitch as if he thinks he’s actually speaking English to me. It’s hard for him to hold his head still when focusing on something; it invariably wobbles from side-to-side.

He’s not exactly the brightest star in the sky.  If I tell him “No,” he’ll look at me for a few seconds, head slightly tilted as if to ask, “but why not?” Then he’ll get distracted and completely forget that he wasn’t supposed to be doing whatever it was that he was doing. You can’t help but love him for it. Everyone loves Andrew.

He doesn’t bother with Nathan much. He’ll occasionally come around, sniff Nathan’s foot inquisitively… ask him a couple questions then walk off. But, if Paul and I dare to be caught showing affection to each other and not Andrew, he’ll march in, sit down, and meow plaintively until we say “No, Andrew!” He’ll usually grunt with dissatisfaction but forgets all about it as soon as something else piques his interest.

He is quite the character. 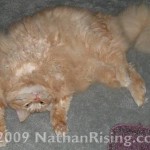 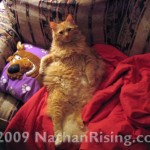 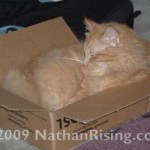 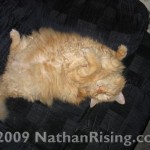 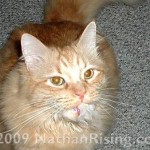 This entry was posted by Jen on August 29, 2009 at 9:25 pm, and is filed under Pets. Follow any responses to this post through RSS 2.0.You can skip to the end and leave a response. Pinging is currently not allowed.